Sock Puppets for Introductions and Greetings

Now the new term has got underway, I am feeling a lot more confident about using the iPads and I lost no time in using them in the first few lessons. One successful project which took very little time was to use the Sock Puppets app to record the dialogues the Year 5s are doing to revise and reinforce greetings and introductions vocabulary.

Sock Puppets comes in a free and a paid version, and I upgraded to the paid version in the course of last year, which gives more features, a bigger choice of puppets, backgrounds and so on.

It's very simple to use: the pupils had prepared a worksheet with a dialogue using introductions and greetings so they had it ready. They then opened Sock Puppets, chose a character each, a background and were allowed minimal props, as they tend to get bogged down in choosing, sizing and positioning props which make the screen look cluttered and take away from the simplicity of the scene, eating up valuable time along the way.

Once they had their two characters positioned on the screen, they pressed record, and tapped the character they wanted to begin the dialogue. A red arrow appears above this character, denoting that they are the speaker. While still recording, the next person taps their character, switching speaker, and they deliver their line. They tap backwards and forwards between the two characters until the dialogue is finished, then tap the record button again to stop recording.

I then asked them to save their dialogues in the app by tapping the save icon: 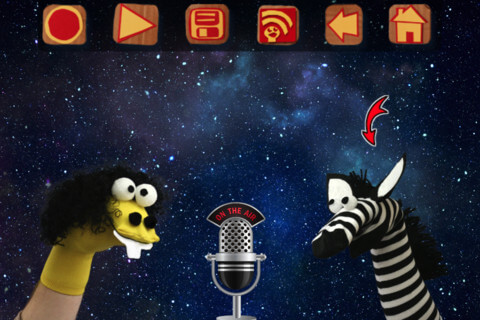 It's the third from the left. Once named and saved in the app, I asked them to save it to the Camera Roll by pressing the share icon, the third from the right. It will encode the video and save it on the camera roll ready for sending elsewhere (in my case, uploading to their digital portfolios on Showbie) or to the VLE.

Quite a number of pairs managed this in just over 10 minutes start to finish, which I'm really happy about because it means that the iPad task is starting to become just another medium through which to apply the learning point. The joy of it is that it motivates the children and provides them with a finished clip they are proud of and can share with parents as proof of their learning.