When I was first set up with an Apple ID and asked which apps I would like to download, Book Creator was definitely high on my list, from what I'd read about it. The IT boss told me they were experimenting with the best method of providing us with a limited budget for purchasing apps and that the easiest way they had come up with was to give each department an iTunes voucher of £15. I laughed and said that wouldn't go far, but how wrong I was! In reality, I have only purchased about three paid apps and with the same Apple ID for all my iPads, you only have to download the app and pay for it once and it downloads on all the class devices. So £15 goes a long way!

Book Creator has a free version and if you're canny, I'm told you can just keep re-using the 'Getting Started' exemplar book by exporting it then deleting it and beginning again. I didn't find that out until I had purchased the app, though!

My reason for getting the fully paid app is that I wanted all of Year 6 (88 pupils) to create a book about their daily routine. We had been learning the phrases 'Je me lève', 'Je prends mon petit déjeuner', 'Je vais à l'école', 'Je prends mon déjeuner', 'Je quitte l'école' (oh, how they loved the idea of quitting school!!), 'Je prends mon dîner' and 'Je me couche'. Along with that they knew time to the 5 minute intervals and some could use linking words like 'normalement', 'd'abord', 'ensuite', 'après' and 'enfin'. 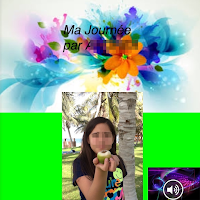 I find that differentiation occurs by way of selection in a task such as this: the pupils are given a brief and it's up to them to raise the bar in their French (explained and encouraged by me) by using 5 minute time intervals rather than quarter hours or just o'clock times and extending their phrases with the linking words. In future I would suggest adding what they ate for the various meals, thereby bringing in vocabulary learned in other contexts.

Before starting this project, I set them homework of taking 7 photos of themselves doing each of the daily routine activities along with seven clock face images showing the time they did those activities. We chose to upload them via Google Drive but that wasn't terribly successful and many struggled with it. At some point someone even managed to delete everyone else's photos! Next time I will find a better solution, perhaps Dropbox or just the school VLE, although that also posed problems for downloading them onto the camera roll.

I first guided them through the various tools and drop-downs in Book Creator, then let them loose, explaining that they needed to produce a book with a title page and seven subsequent pages, one for each phrase of the daily routine they had learned. They needed to put a photo of themselves doing that activity plus the clock face. The French came in by having to write text saying what what they did and at what time. Finally, to practise the speaking element, they had to add a sound file for each page, reading the phrase they had written. A truly multi-media e-book! 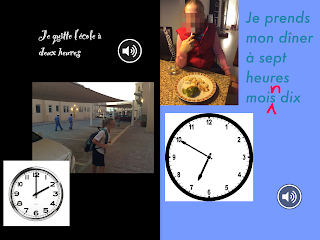 Finished books were to be uploaded, as always, to Showbie, from where I could open them in the app, thereby preserving the app functionality, and marking them with written and recorded feedback. A second version was also exported as a movie to the VLE. This project took something like four weeks' worth of lessons because at this point I still only had one iPad between two, although a number of pupils were happy to bring their own iPads to work on in class. This is a lot more time than I would be prepared to spend in future, but it was the first big project we had embarked on and once started, I was committed to seeing it through.

I was very pleased indeed with the end results and have mentioned them regularly in end-of-year reports as an example of work the pupil should be proud of.

A small note re pupils who simply didn't manage to upload the photos at the first step - there were, unfortunately, a few. I had ready a mini book template (styled on those of Clare Seccombe of Lightbulb Languages http://www.lightbulblanguages.co.uk) so that they would still be able to participate in the project, albeit in good old paper and pencil form. Surprisingly I had about 8 pupils who needed to do it this way, but I hoped that having seen the end results of their peers, they would feel that the next time they would be prepared to put in that bit more effort to try and join the rest of the class in the digital project. It wasn't for lack of resources, more lack of willingness to have a go, and after a few more months of tech experience, most of them are now happier working in the digital medium.